Malik Yakini, co-founder and executive director of the Detroit Black Community Food Security Network, shares insights about his work to advocate for food justice and why it’s so important to ensure people have ownership of their food systems. His organization operates a seven-acre farm, which is the largest in Detroit. 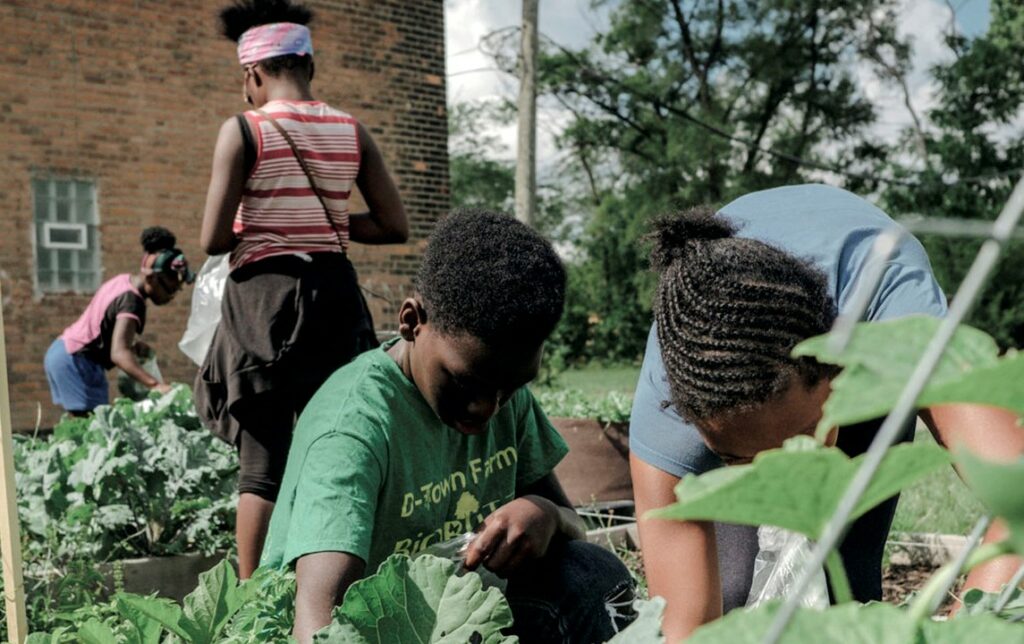 In the United States, we have the technology and the know-how to grow enough food to feed all human beings. But that isn’t happening.

Hunger is real for millions in America, particularly in Black and Brown communities.

Clearly, we need to do more than just make sure people’s bellies are full. We need to address the root causes of inequities that put high-quality nutritious food out of reach for so many, including the tremendous disparity in wealth that is created by the global system of capitalism and the legacy of slavery.

“We need to build more fair, resilient, and localized food systems, and break away from the industrial food system that has a stranglehold on us now.”

That’s why, in Detroit, we’re working to create food sovereignty—where the food system is shaped, defined, and controlled by the people who are producing and consuming the food.

As most people know, Detroit really made its mark on the world in the last century as the automobile capital of the world. But as the U.S. domination of the global auto market began to decline, so did the economy of Detroit. Today, about 30 percent of the population lives at or below the federal poverty level. Many Detroiters go hungry, particularly Black residents, and the pandemic has only made food insecurity in the city worse.

The Detroit Black Community Food Security Network focuses on helping people have control of the systems that provide their food so they’re really exercising agency and shaping their own destiny.

It starts with food production.

In Detroit, we have a tremendous urban agricultural movement—one of the most robust urban agriculture movements in the country. Most people are concentrated in urban areas, and so it makes more sense, both in terms of getting nutrient-dense food to people quickly, and also in terms of doing the least harm to the environment, to grow food closer to where we have centers of population density.

Tending to the crops at D-Town Farm.

Next, we need to look at how we buy and sell food.

We need co-ops on all levels: farmers and producers’ co-ops, distribution co-ops, and cooperatively-owned grocery stores. Co-op businesses foster economic strength in neighborhoods and empower residents with more equitable pay and ownership in the company.

The food we produce at D-Town Farm is sold at farmers’ markets and to wholesale customers. We’ve also established the Detroit People’s Food Co-op, which currently has more than 1,300 member owners and is scheduled to begin construction in the next few months.

It was that thinking that prompted us to start the Food Warriors Youth Development Program, where we teach youth about the food system so they become empowered to make decisions that benefit their health, their communities, and the environment for generations to come.

I have not seen much in history that gives me hope that the corporate sector will make much change without tremendous pressure that affects their bottom line.

If we begin to shift power away from the industrial food system to support small-scale, regenerative, sustainable, local initiatives, we will create more self-reliant communities and be a lot further along toward having food justice.

Malik participated in a global learning exchange with farmers in Malawi, funded by the Robert Wood Johnson Foundation, to share lessons around building community power, that are captured in the documentary The Ants and the Grasshopper. Watch the Reimagined in America webinar to learn more.