Reducing or eliminating consumption of sugary drinks is critical for helping kids grow up healthy. 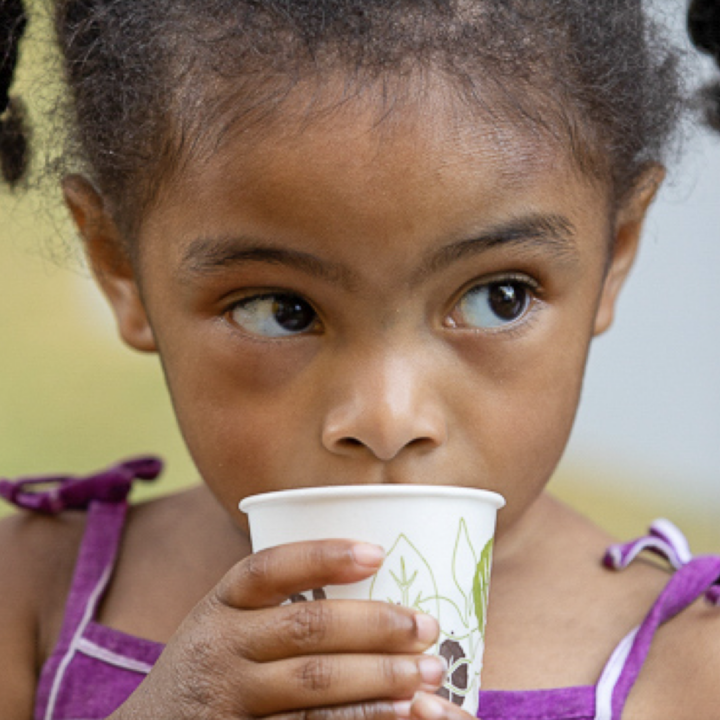 What can you expect to learn here?

This special feature highlights the latest data and trends on sugary drink consumption and facts about how sugary drinks impact kids’ health. It summarizes efforts and recommendations for reducing consumption, recent research, and stories of communities taking action.

What is the impact of consuming sugary drinks? 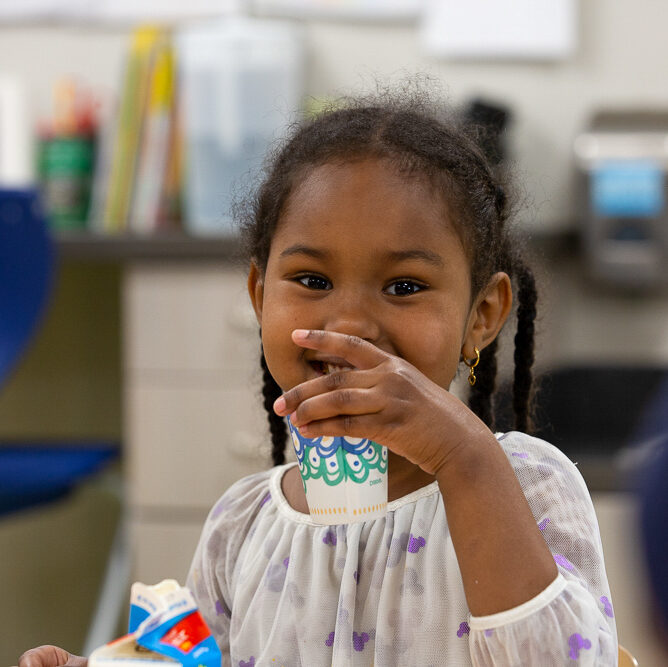 Who’s consuming sugary drinks and how much are they drinking?

Sugary drinks are the top source6 of added sugar in kids’ diets. Nearly two thirds7 (61%) of U.S. children and youth consume sugary drinks each day; among children ages 2 to 4, nearly half8 (46%) do. Learn more about the different patterns of consumption by age, race and ethnicity.

The 2010 Dietary Guidelines for Americans recommend limiting added sugars to less than 10% of daily calories. How many children do? 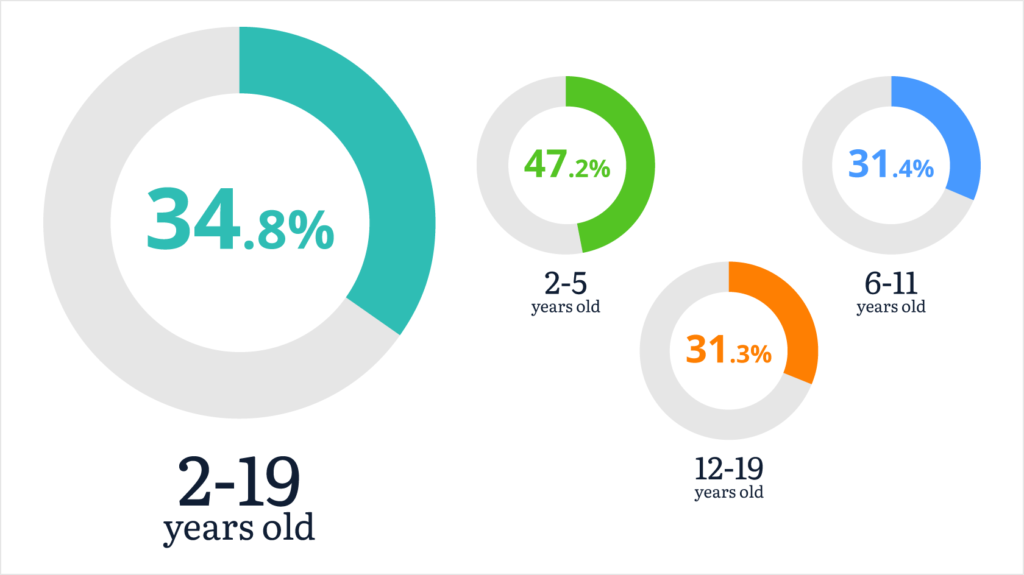 What types of drinks do children consume on any given day? 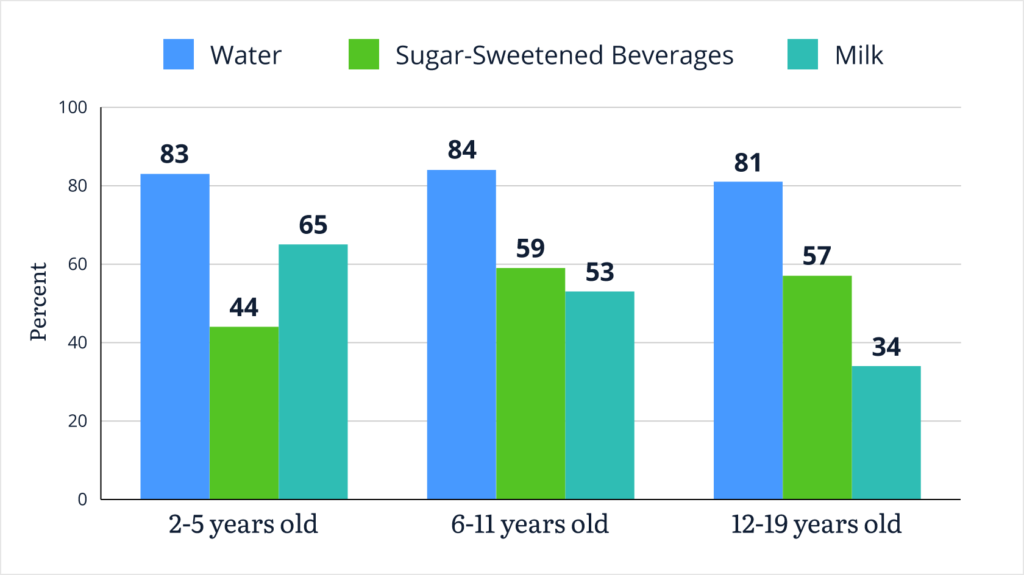 What types of drinks do children consume on any given day (by race and ethnicity)? 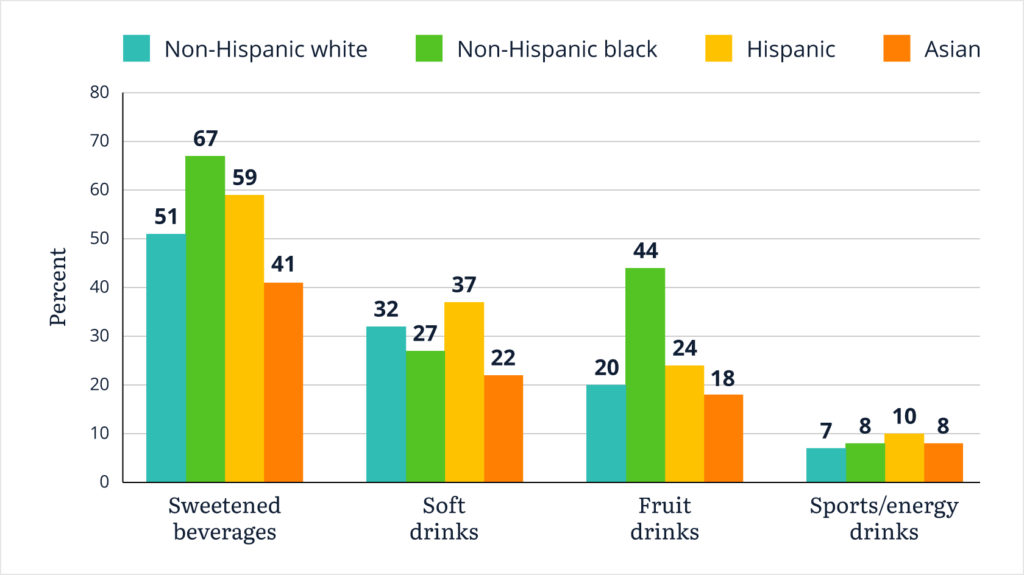 Sugary drinks are the leading source of added sugars in children’s diets across, all age groups. 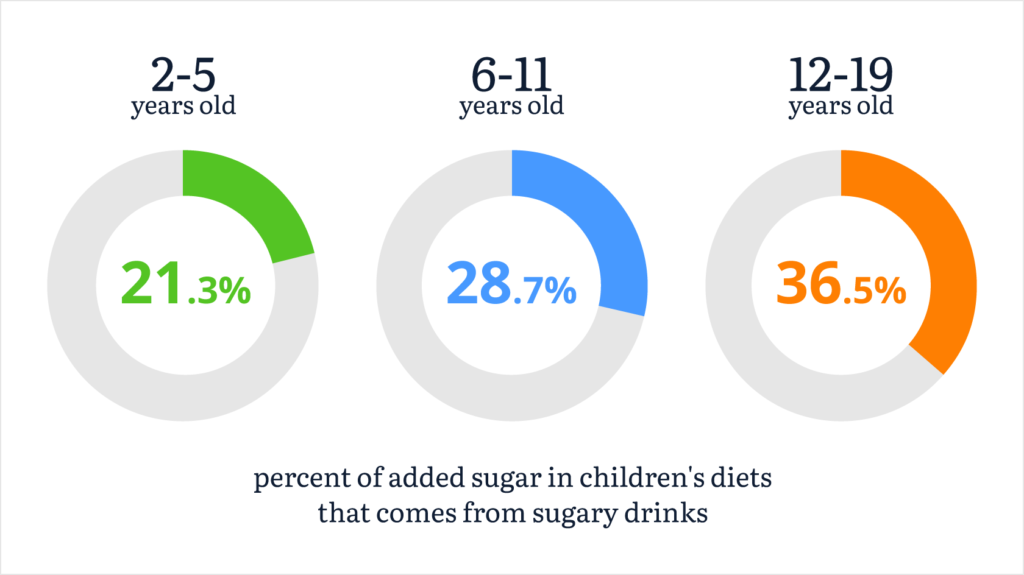 How many young people are heavy consumers of sugary drinks?

Over roughly the last decade, the percentage of young people who are heavy consumers of sugary drinks—drinking about 3.5 12-ounce cans of soda each day—has dropped significantly. These declines were significant across family income level, sex, and for white, Black, Mexican-American and non-Mexican Hispanic youth. 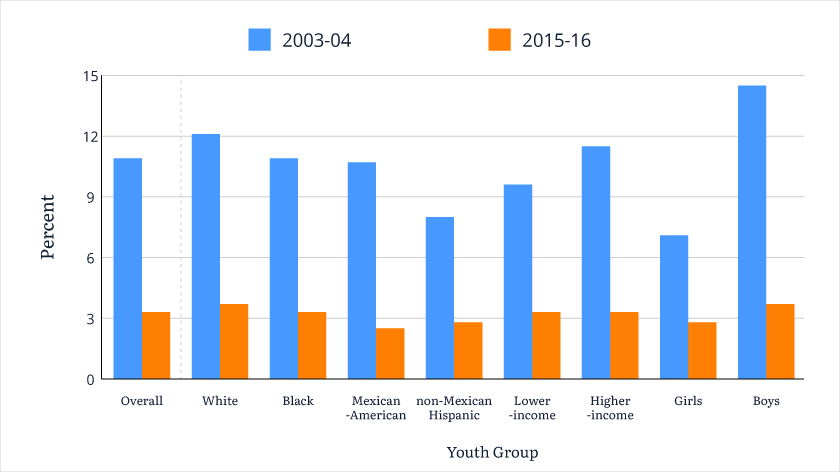 How are companies marketing sugary drinks?

Deceptive marketing practices shape kids’ preferences and purchases, and therefore, their diets, overall health and life trajectory. These practices are particularly targeted toward communities of color10 through place-based marketing, prices designed to appeal to specific income groups, promotions that exploit cultural images and language, and products that are developed specifically for their communities.

Kids are particularly vulnerable to unfair advertising and marketing practices. Research shows companies spend more money directing sugary drink ads at Black and Latinx youth – and companies target kids as young as age 2  with TV ads for sugary drinks. For example, spending on sports drink advertising increased 745% from 2013 to 2018 and exposure to these ads among Latinx kids increased 10-fold or more during that period. In 2018, Black children and teens saw twice as many ads for sugary drinks as their white peers.

The majority of children’s drinks sold in 201811 were sweetened fruit drinks and flavored waters with added sugars and/or low-calorie sweeteners. Looking at the front of the packages, many sugary children’s drinks appear to be healthy choices, with images of fruit and nutrition-related claims, but none meet expert recommendations for drinks that should be served to children under age 14.

What policy efforts are underway to reduce sugary drink consumption?

At the federal, state and local levels, community members and decision-makers are creating and implementing policies to promote healthy beverages and curb kids’ consumption of sugary drinks. 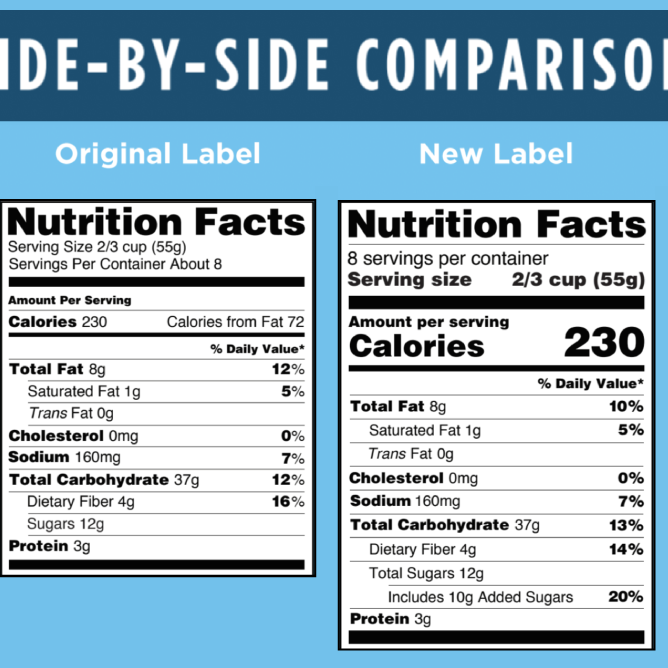 Healthy Kids Meals: How Local Action Can Spur Policy Change Across the Nation

Sugary drinks harm our health and contribute to serious diseases, like obesity and diabetes, that disproportionately affect Black and Latinx communities and increase risk for more severe cases of COVID-19. We should be doing everything we can to help all kids and families avoid sugary drinks—it’s more important than ever.

What has been the impact of taxing sugary drinks?

Seven U.S. cities and the Navajo Nation have passed taxes on sugary drinks, ranging in value from one to two cents per ounce. Research has generally found that the taxes result in people buying significantly fewer sugary drinks. Some studies show people are consuming fewer sugary drinks overall after the taxes pass. And, revenue programs are helping to address health and socioeconomic disparities in some communities.

What other strategies are places using to reduce consumption?

What can we learn from other research?

Guidelines for Babies and Toddlers

In 2019, four national public health organizations released guidelines for what babies and kids ages 0-5 should drink, recommending water and plain milk as the go-to drinks for young kids. Drinks with added sugars or low-calorie sweeteners are not recommended for children under the age of 5. Unfortunately, a 2019 Rudd Center report showed that not one of the 34 top-selling sweetened children’s drinks met expert recommendations for healthier drinks. Read the guidelines.

Researchers identified three obesity-related interventions that would save more in healthcare costs than they would cost to implement: sugary drink taxes; elimination of the tax subsidy for advertising unhealthy food to children; and nutrition standards for food and drinks sold in schools outside of school meals. Read the study.

ChangeLab Solutions produced a 10-strategy guidebook to help communities reduce consumption of sugary drinks, including considerations for health equity and collaboration across sectors. See the playbook.

Healthy Eating Research developed a national research agenda that outlines research gaps and opportunities for practitioners, researchers and foundations to pursue in order to reduce sugary drink consumption and increase safe water access and consumption among kids age 5 and younger.  Read the agenda.

What policy efforts does RWJF recommend for reducing kids’ consumption of sugary drinks? 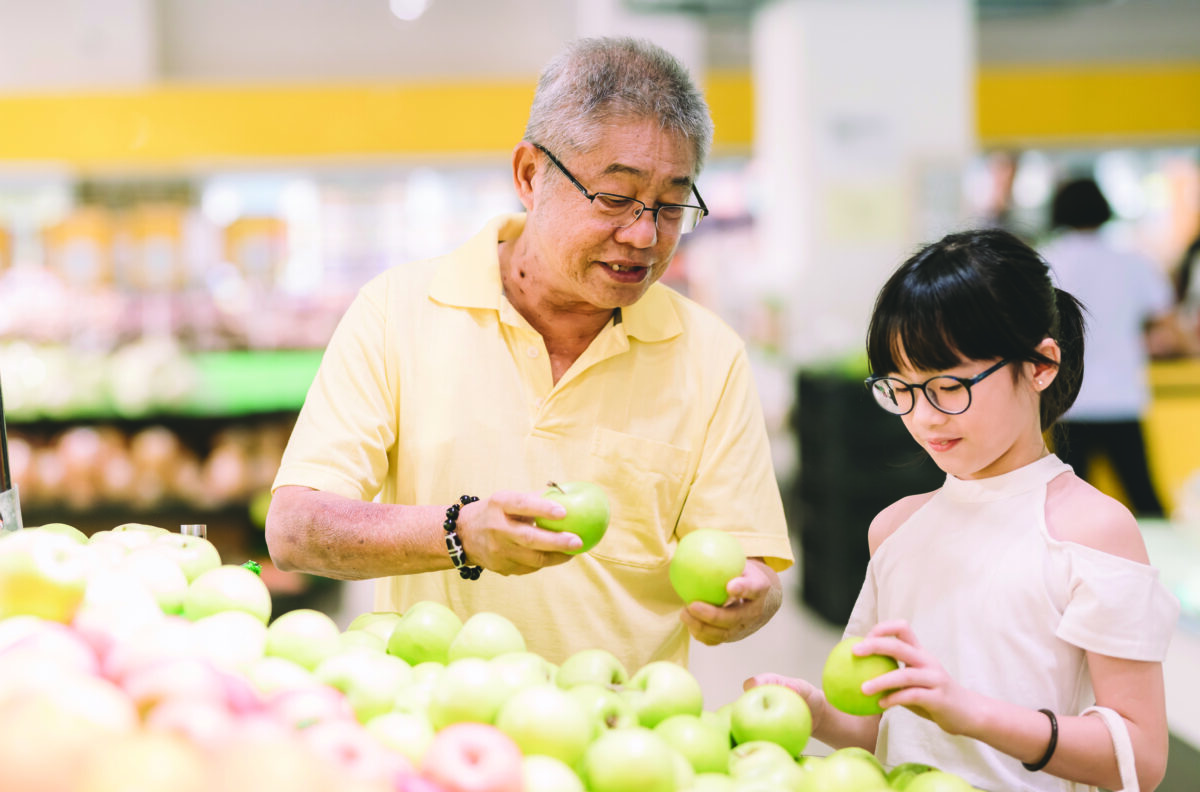