In this guest blog post, the Safe Routes Partnership highlights how strong state support in Minnesota has helped build a robust program that has benefited nearly 500 schools and reaches 110,000 students every two years.

For more reading on how state policies can support physical activity and the National Partnership’s report cards, read our conversation with Michelle Lieberman, Senior Technical Assistance Manager at the Safe Routes Partnership.

Safe Routes to Schools (SRTS) programs are so popular in Minnesota that sometimes when the state puts out a call for proposals, community requests end up exceeding the available funding by as much as five to one. Nearly 500 schools have been awarded SRTS funding through MnDOT since 2005, and more than 110,000 students are currently benefitting from SRTS programs at their schools, by walking and biking to and from school more often.

A look back at how Minnesota’s SRTS program has evolved since 2012 shows how a successful legislative campaign, fueled by strong community demand, has led to a formalized, state-funded program with a long-lasting impact for students and communities.

In its 2018 report, the Safe Routes Partnership awarded Minnesota the maximum number of points possible for dedicated state SRTS funding and for funding non-infrastructure projects. The state’s success in this area can be traced back to a legislative campaign that began in 2012, when the federal SRTS program was ending.

At that time, health and transportation advocates in Minnesota formed a broad coalition to build support for a dedicated state program. The coalition was made up of more than 50 organizations, including the American Heart Association, the Bicycle Alliance of Minnesota, the Minnesota for Healthy Kids Coalition, the Minnesota Medical Association, MinnesotaPTA, and the St. Paul Promise Neighborhood – a 250-square block area in St. Paul in which 80 percent of the residents are from communities of color. 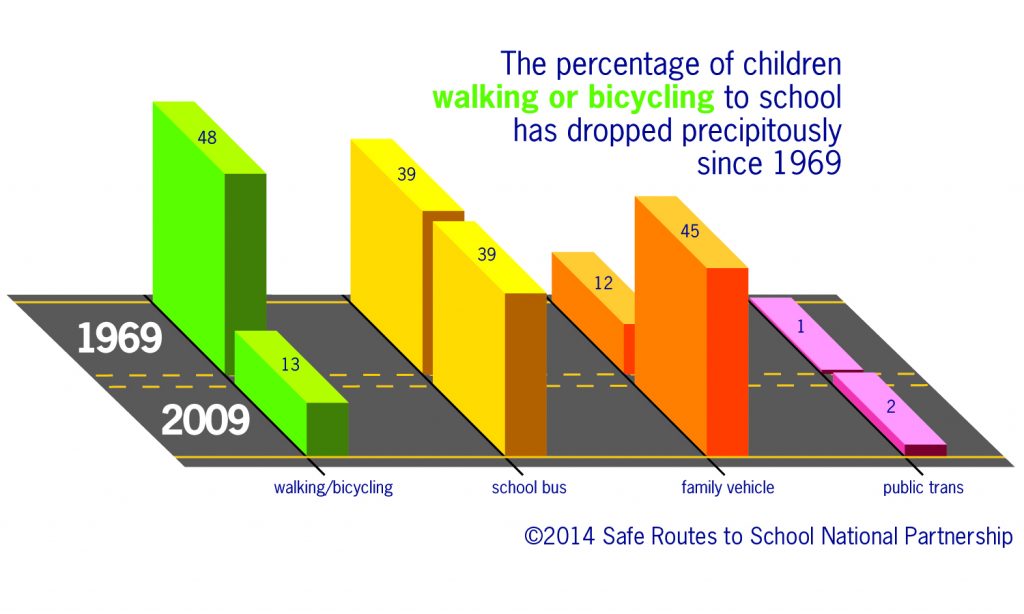 The coalition successfully got the state to establish an SRTS program, but the program had no funding for the first year due to a significant state budget shortfall. In 2013, despite a continuing budget shortfall, the coalition built bipartisan support that led to $500,000 in funding over two years.

With a grant from Voices for Healthy Kids, a joint initiative of the American Heart Association and Robert Wood Johnson Foundation, in 2014 the coalition went back to work on a new campaign initiative to build broad, bipartisan public and legislative support for more SRTS funding. In response, the legislature approved $1 million for SRTS infrastructure funding and an additional $250,000 per year for programming, yielding a total of $500,000 annually for non-infrastructure funding.

“Prior to 2012, the majority of investments in SRTS in Minnesota were focused on infrastructure,” said Dave Cowan, Minnesota’s SRTS state coordinator. “We were funding a lot of sidewalks and crossings near schools, which were needed, but we weren’t delving into education and encouragement. Since 2014, when the current funding structure was established, we have been able to use the non-infrastructure dollars to support communities through rigorous planning processes and strategically select projects that were included on the non-infrastructure side.”

The annual non-infrastructure funding has also bolstered the state’s bicycle and pedestrian safety education program, which has trained more than 700 teachers to provide walking and bicycling skills lessons to students.

"In just the past few years, I've noticed a shift in culture. Public health professionals, policymakers, education partners, and DOT staff are working together in many ways to support safe, equitable streets for people who walk and bike.”

Minnesota also received full points in the State Report Cards for having retained its full-time SRTS coordinator position, even though it’s not required.

“Having a dedicated state coordinator focused on SRTS within the DOT is critical,” said Cowan. “There is a lot of work to do beyond administering funding – it’s crucial to also focus on relationship-building and education both within and outside of the agency around the value and importance of walking and biking to school. The more staff you have doing that, the more impact you’re going to have over time.”

Minnesota also earned the maximum number of points for providing technical assistance for SRTS initiatives. The program helps communities with funding applications by offering webinars, workshops, guides, and other outreach. The state also launched its SRTS Academy in 2016, which offers a free training to help communities build a comprehensive SRTS program or take their existing program to the next level. “We customize the training based on the community’s level of experience, and provide it to any community that requests it,” said Cowan.

Minnesota’s strong score in the State Report Cards gives advocates even more leverage to build support for prioritizing SRTS through the federal Transportation Alternatives Program, and demonstrates how a state’s commitment to supporting SRTS can lead to better health and activity outcomes for kids.

“Even in just the past few years, I’ve noticed a shift in culture and in the way people talk about transportation at the state level,” says Cowan. “It’s not just SRTS program staff that care about prioritizing walking and biking. Public health professionals, policymakers, education partners, and DOT staff across departments are working together in many ways to support safe, equitable streets for people who walk and bike.”